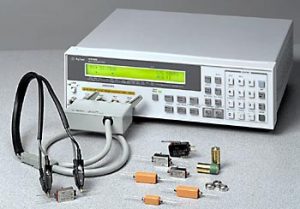 In this episode Shahriar repairs an Agilent 4338B milliohmmeter. This instrument is capable of measuring extremely small resistances down to 10uΩ while maintaining a DUT voltage of less than 20mV. The instrument powers on with the message ADC Failure. Investigation reveals that the instrument uses an obsolete ADC which must be removed from the board in order to reverse engineer its operation. While the ADC turns out to be functional, a PAL device which controls the ADC timing is faulty. A new device is salvaged from a donor board to complete the repair. The instrument is then used to measure several small known resistances.

This site uses Akismet to reduce spam. Learn how your comment data is processed.