Teardown, Upgrade and Experiments with a Verity Visible Wavelength Monochromator 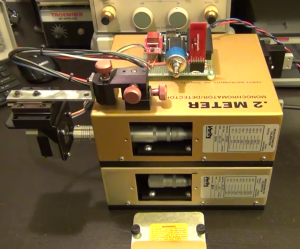 In this episode, Shahriar upgrades a Verity visible wavelength monochromator model EP200Mmd to be able to perform automatic scans. The instrument is retrofitted with a stepper motor and a microcontroller which performs wavelength scanning between 225nm to 875nm. The signal from the internal photomultiplier is sampled by the microcontroller and wirelessly sent to the computer. Matlab is used to plot the wavelength response.

The principle operation of a monochromator is thoroughly reviewed starting with the grating mirror behavior. The operation of the photomultiplier is also described. Various mechanical and electronic of the upgraded system is also shown. The presented slides can be found here.

This site uses Akismet to reduce spam. Learn how your comment data is processed.