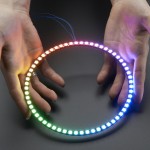 In this episode Shahriar takes a close look at programming the popular NeoPixel RGB LEDs using a PIC microcontroller and C-language. A close-up of the NeoPixel (WS2812) LED is shown with attention to identifying various semiconductor elements inside the package. The principle operation of the LED is the described along with a detailed explanation of the pins and the one-wire communication protocol.

A simple evaluation board for the PIC18F4550 is used to drive a circular array of 60 NeoPixel LEDs from Adafruit. After presenting the difficulties of providing an accurate pulse-shape using the C-language, the measured waveform is shown on a Tektronix MDO4000B. Finally, the code for a circular color rotating pattern is presented and demoed. The code for the experiment can be downloaded here.

There is also equipment giveaway! A TPI Scope Plus 440 and a Tektronix TDS2232 are being given away at no charge! Please leave a comment on the video or on the website. You must be a resident of the USA to receive the giveaway. A winner will be chosen at a later date and notified via email. 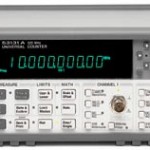 In this episode, Shahriar upgrades an Agilent 53131A Universal Counter with the OPT-030 which extends its frequency range from 225MHz to 3GHz. The upgrade kit is a replica PCB intended to emulate the behavior of the original Agilent branded option.

The PCB is examined carefully with attention to microwave layout techniques along the signal path. The datasheet of all the parts are reviewed and the reverse-engineered block diagram of the PCB is presented. The expected behavior of the PCB is then measured in both small-signal and large-signal operation using an active 3GHz probe. The PCB is then installed inside the unit and the functionality of the instrument is verified within its specifications. All the documents presented in the video can be found here.