Tutorial on the Theory, Design and Characterization of Nyquist Digital to Analog Converters 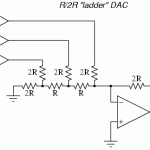 In this episode, Shahriar presents the theory, design and characterization of Nyquist Digital to Analog Converters (DACs). After a brief overview of DAC operation and theory, the schematic of an 8-Bit R-2R DAC is presented. The R-2R DAC, which is driven by a dsPIC30F6014A Microchip microcontroller  is capable of producing ramps and arbitrary waveforms uploaded through an RS232 interface. The static integral non-linearity (INL) and differential non-linearity (DNL) is measured by using a Rigol DM3068 Multimeter through a Matlab interface program. The dynamic performance of the DAC is characterized using an Analog Devices AD6645 105MSps 14-Bit ADC evaluation board coupled with a USB FIFO interface board. By using the ‘Visual Analog’ software, the spectrum of the DAC output as well as the signal to quantization and distortion ratio (SQNDR) is calculated. Finally, the impact of component mismatches, operational amplifier non-linearity and timing uncertainty on the INL/DNL and SQNDR (ENOB) of the DAC is examined.

Equipment Review
This site is protected by Comment SPAM Wiper.