Tutorial on the Theory, Design and Characterization of a Single Transistor Bipolar Amplifier 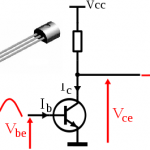 In this episode Shahriar presents a tutorial on the design and characterization of a single-stage low-noise bipolar amplifier suitable for audio applications. Given a set of specifications, a common-emitter topology is investigated. The circuit employs a beta-insensitive biasing scheme which is simultaneously optimized for  maximum output swing. The small-signal gain of the circuit is calculated and the bandwidth is set for audio frequencies. A non-inverting operational amplifier is used as a second stage to achieve the desired overall gain. The circuit is assembled on a breadboard where the gain and bandwidth are measured and compared with design specifications. As the final experiment, the circuit is used to amplify signals from a microphone. All documents can be downloaded from here.